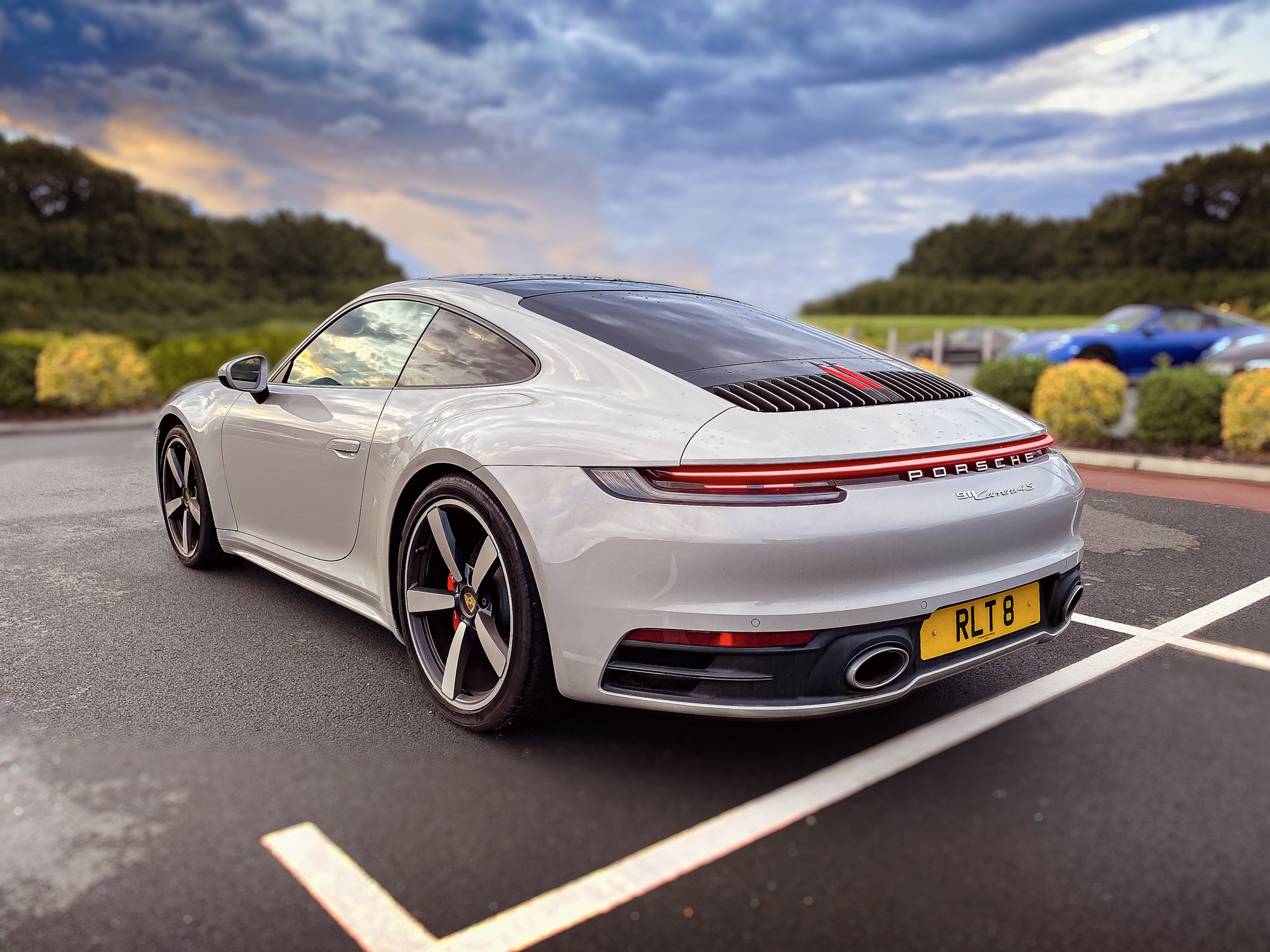 Trip to the Chester Porsche Centre in Ellesmere Port. It had been raining and it was past closing time but I had a wander around the stock and came across this grey 911. It was asking to be photographed, but I only had my iPhone 11 Pro with me. I grabbed a few shots and figured I could make the edits when I got back home – the key was getting the right photo in the first place.

This is the original image of the 911 3.0l Turbo 992 Carrera 4S I took at the Porsche Centre Chester. This is a particular favourite of mine. I love the massive, unapologetic wheels, and the understated grey. As you can see though, the surrounding buildings, posts and other items don’t help your eye focus on the car. In some ways, I think there’s an optimum design for showing off premium cars which only really happens in the showroom.

Anyway that aside, I figured the actual photo of the 911 at the Porsche Centre Chester was okay and I’d have a go at changing the shot to focus more on the car itself. 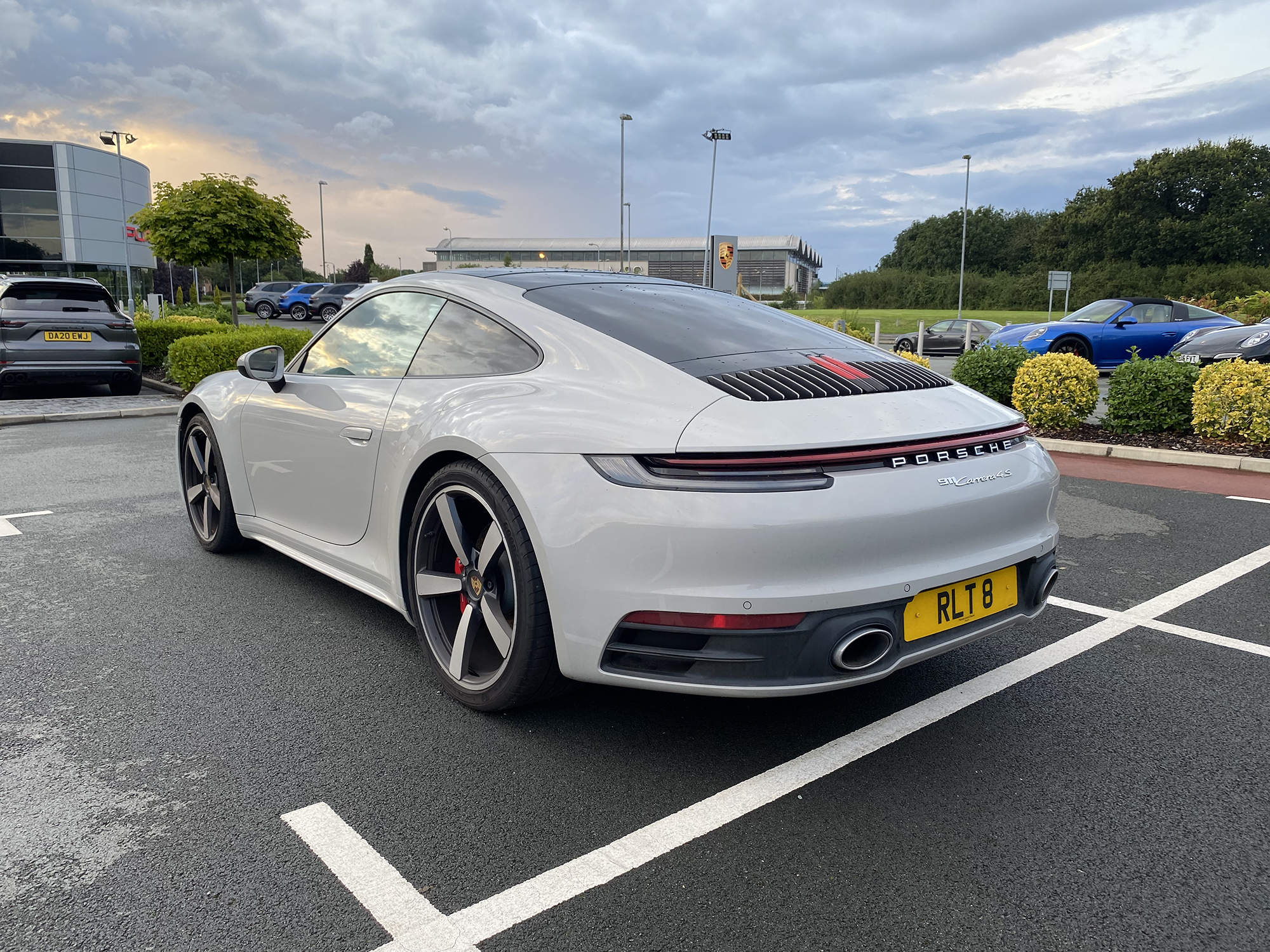 The first port of call was to isolate the Porsche 992 Carrera 4S from the rest of the Porsche Centre Chester. This would allow me to tweak the Porsche 911 and also the background without one affecting the other (I left the holistic stuff until last). I did this in the usual fashion by masking out the Porsche using a small brush. I did the same with the Renault Clio v6 I recently photographed in West Kirby. 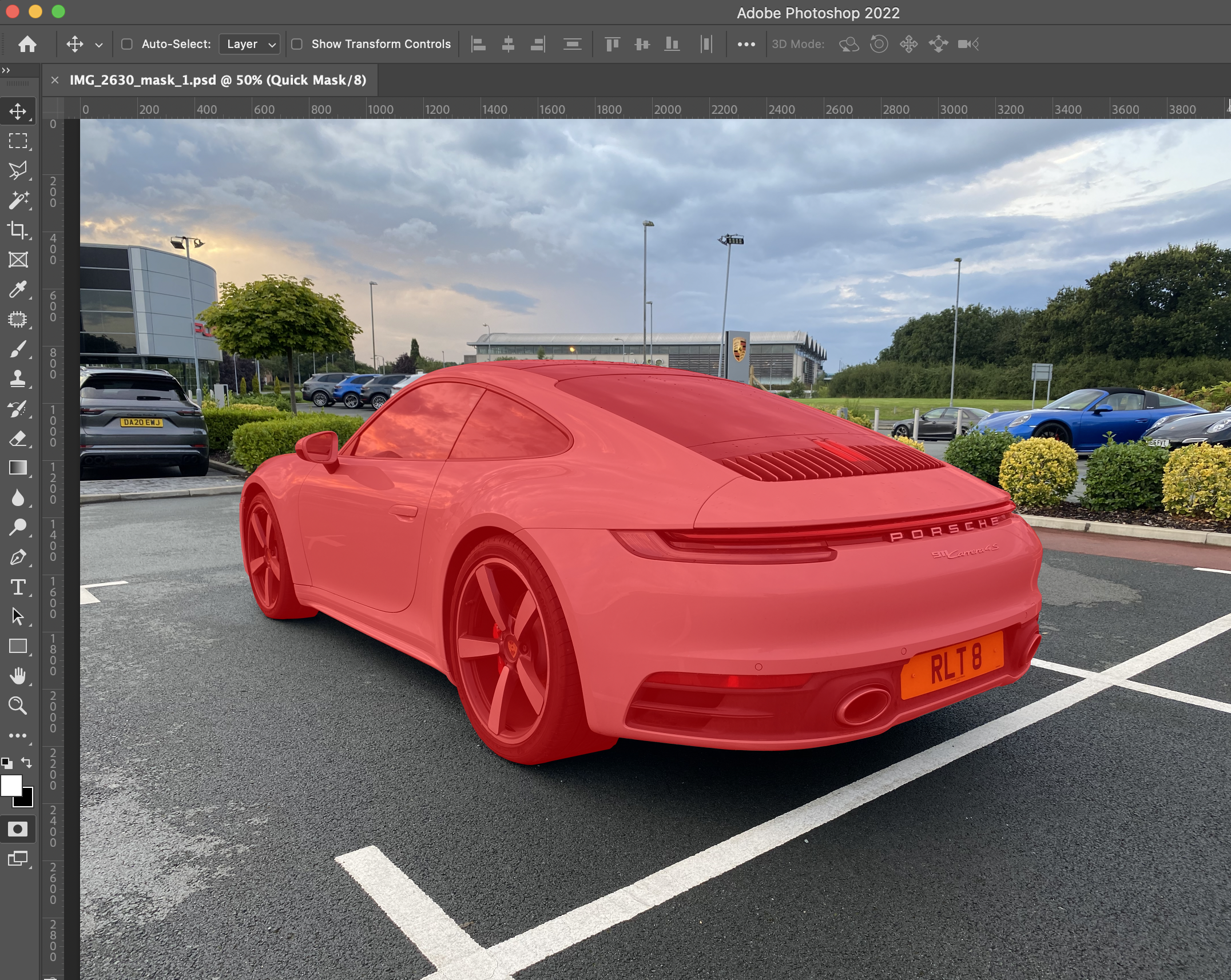 Adjusting the 911 Lights & Other

I liked how the photo was going, cloned in some bushes and removed the buildings in the background. I then blurred out the background using the lens blur function (as would happen with a decent SLR). I really wanted to bring the back of the car to life though and thought I’d fake the brake lights being on. I had to do some research as I wasn’t sure how they worked (they’re a lot posher looking than conventional cars). Here’s the before and after. 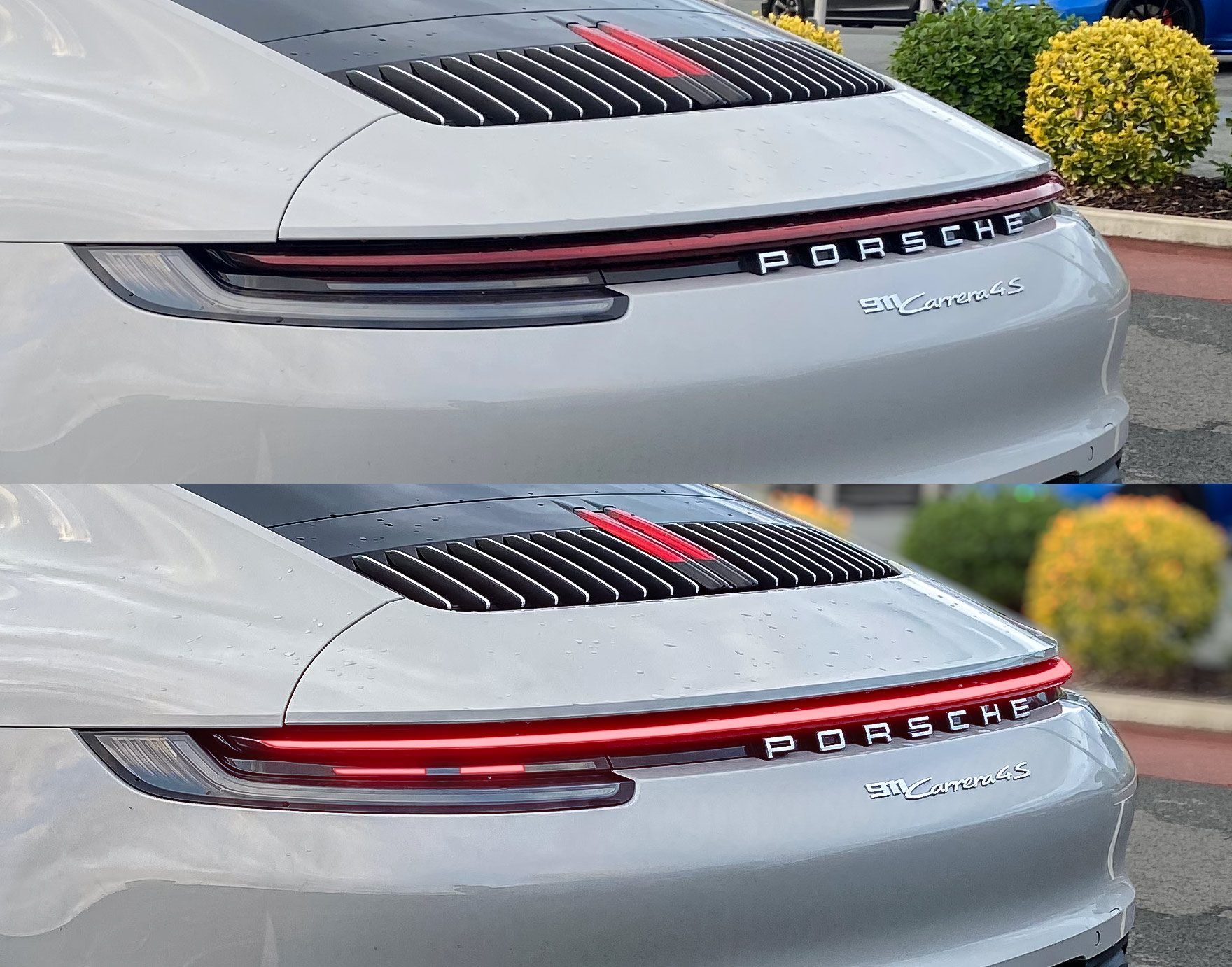 Here’s the final image of the Porsche 911, 992 Carrera 4S at the Porsche Centre Chester. I’ve lens corrected it, added some minor improvement actions along with a tweak using the RAW filter. I’ve also ‘zoomed’ out using the content-aware fill. You can see around the edges it didn’t do a very good job so in the next photo I attempted to fix this. As the Porscheile 992 is so strong an image, the eye is naturally drawn away from the periphery. 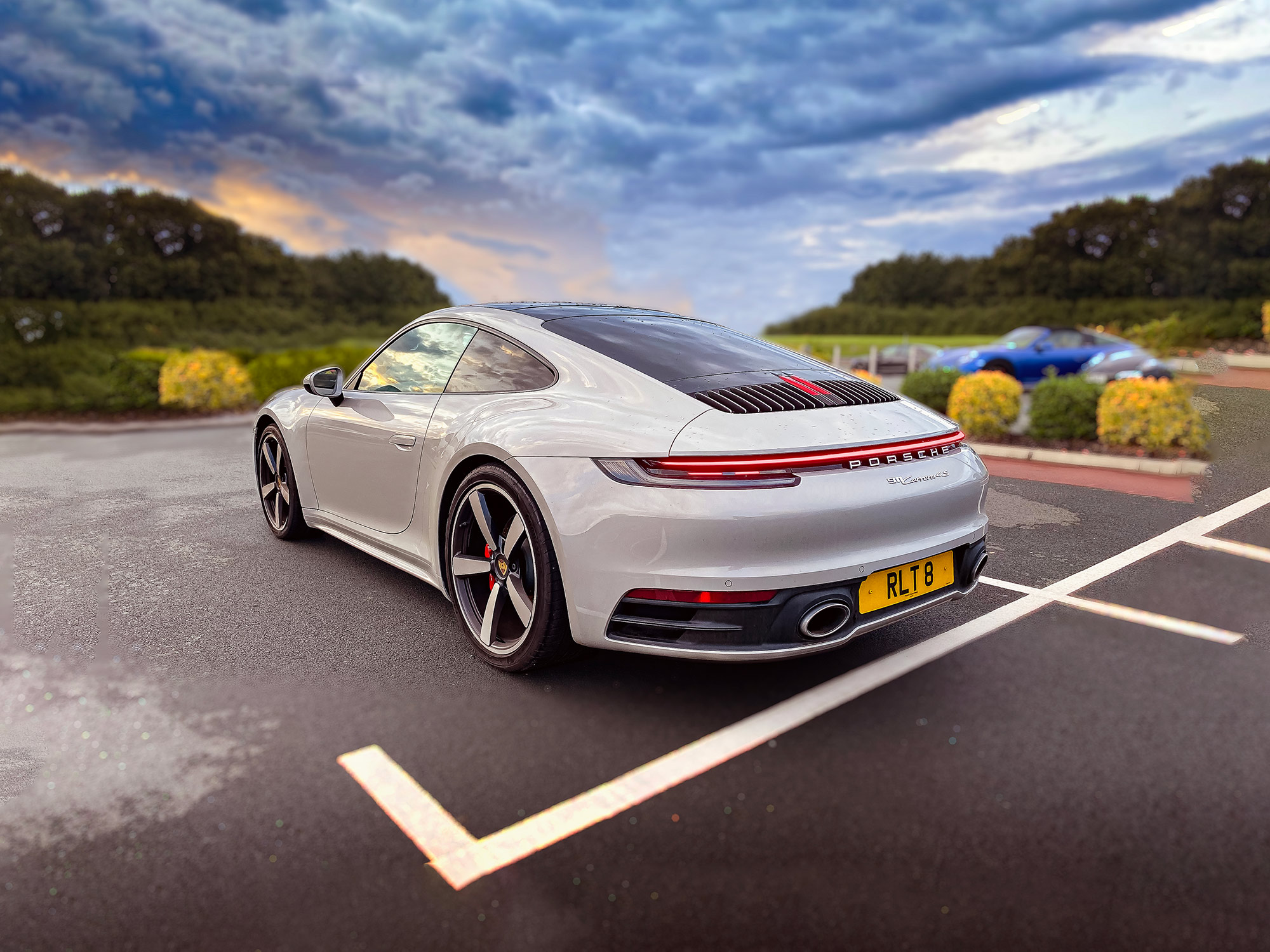 Before I close off the edit of the Porsche 911 at the Porsche Centre in Chester, I just wanted to have a quick play with something most photographers don’t go near. These are colour look up tables (or LUTs). They’re a type of colour grading that can be applied to the entire image and can have a variety of styles and outputs. This is one I used on an adjustment layer called Soft_Warming, but there’s plenty to pick from and you can always download and add more later on. 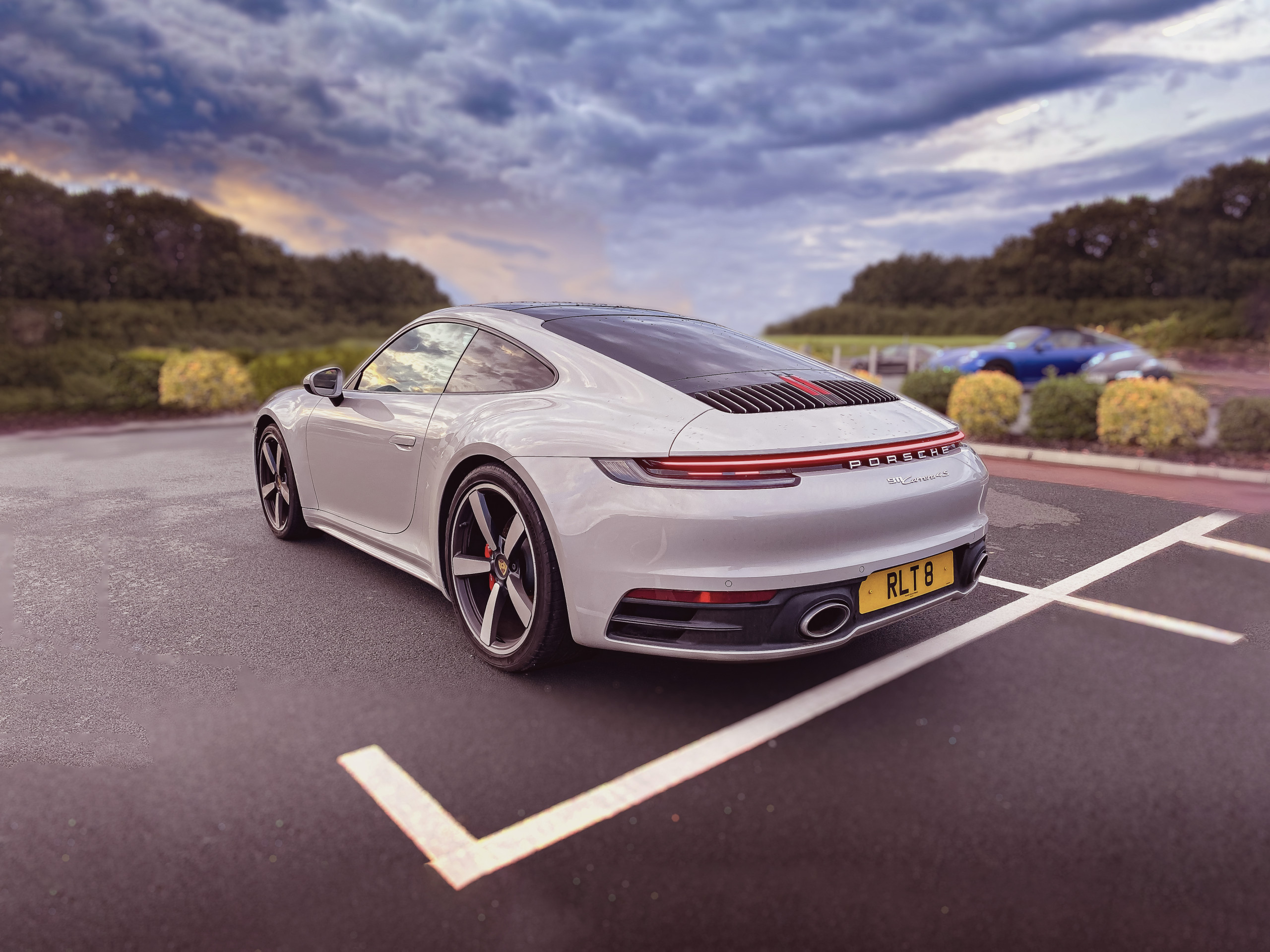