On the way home from the Apple Store in Liverpool One I came across this yellow AMG GT parked in Exchange Street West next to the Town Hall (where they filmed some of the new Ipcress Files). I’ve not seen a yellow AMG GT before. One of my favourites is the green one, but this was very arresting, nicely parked behind some monstrous brown Nissan and a white van. This Mercedes-Benz AMG GT has a 4.0 V8 BiTurbo and was registered in 2000.

The yellow Mercedes Benz AMG GT was pretty hard to shoot given the amount of background ‘noise’ and the fact I was on a busy pathway. I used my iPhone 11 Pro for this shot and did some pretty heavy photoshopping. Here’s the original image of the Mercedes Benz AMG GT. 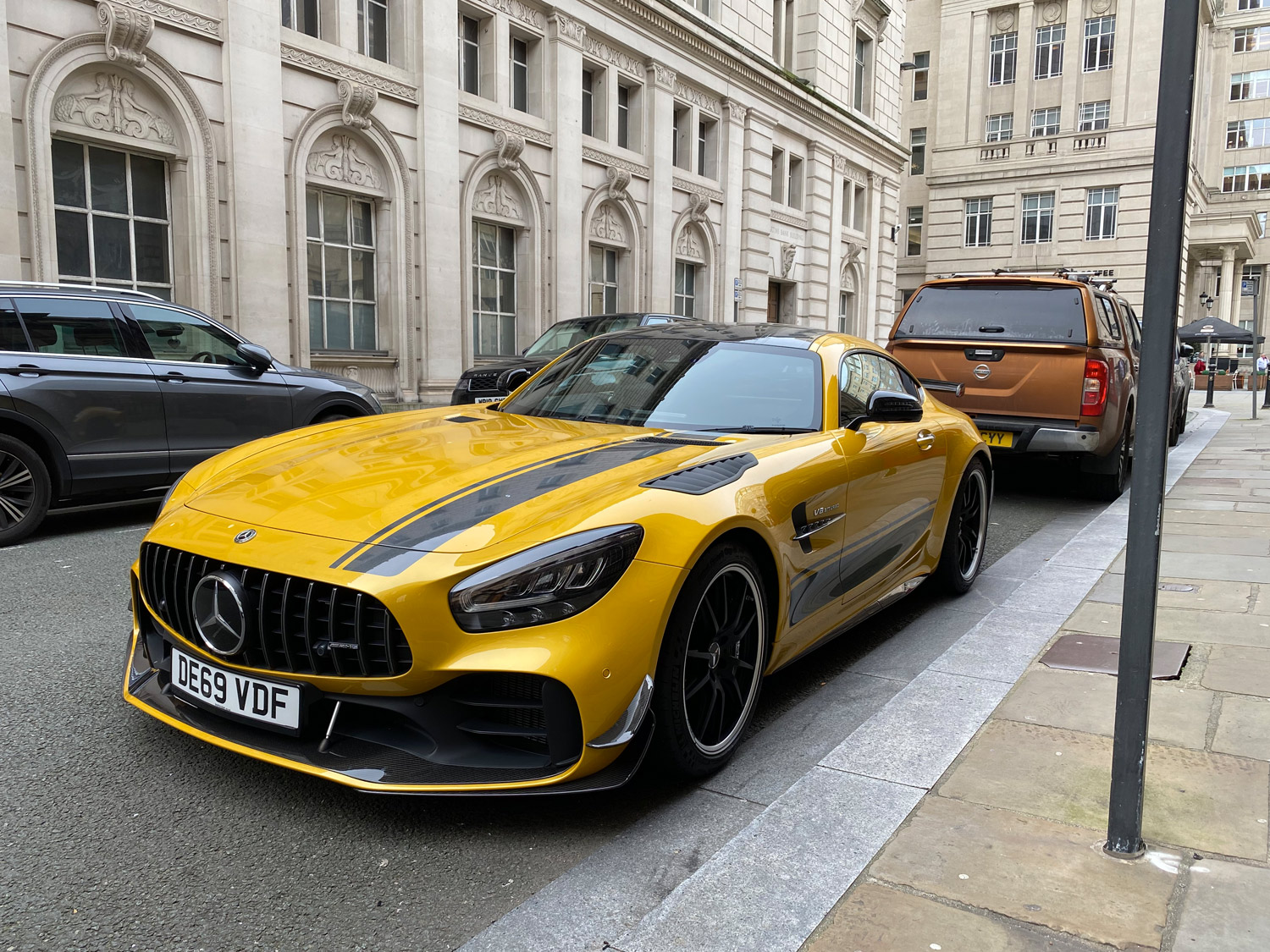 So what did I need to change?

First off the post needed removing. In the final image this didn’t actually matter, but initially I wasn’t sure how much it was going to affect the picture. The UK seems to be obsessed with signs and signals and orders all on posts. It’s annoying when you drive and it’s worse when you try and take a photo of anything.

I then cut out the car using a layer mask so I could fine-tune the background. Masking the AMG-GT meant I could easily manipulate everything else without fear of mucking up the car.

Next, I blurred out the background using lens blur to get rid of some of the noise. I used lens blur here. The key is also to shrink the background by a couple of percent. Imperceptible to the eye, but otherwise you get a fuzzy edge around the object you’ve cut out.

I then used a 50% grey layer to make some important highlights and shading on the car, paying particular attention to the wheels and the front grate, which hadn’t come out very well. I also spent a bit of time trying to bring out the detail in the headlights of the AMG-GT’s. They’re really nice and I didn’t realise they had a little AMG sign on them.

I followed this with some tweaks using the RAW filter to bring out some of the shading and detail and then darkened some of the background to lift out the yellow. This was done with a new layer under the car and painting black, then changing the layer style.

There were some issues with the building in the background which needed correcting (from removing the pole) and then I fixed the perspective which wasn’t quite right. I’m happy with the result, the tweaking of the detail of the car allowed me to bring out the features and create a richer yellow.

Final Actions on The AMG-GT

I decided to try out some Photoshop actions on the AMG-GT to see what would happen. Actions can be a friend and an enemy sometimes, but the pack I use does allow you to switch them on and off and muck about with the opacity. I applied about three here in different forms from cooling the image to making it a bit more colourful. At the end of the day it probably doesn’t really add much, unless you’ve got a specific style in mind. 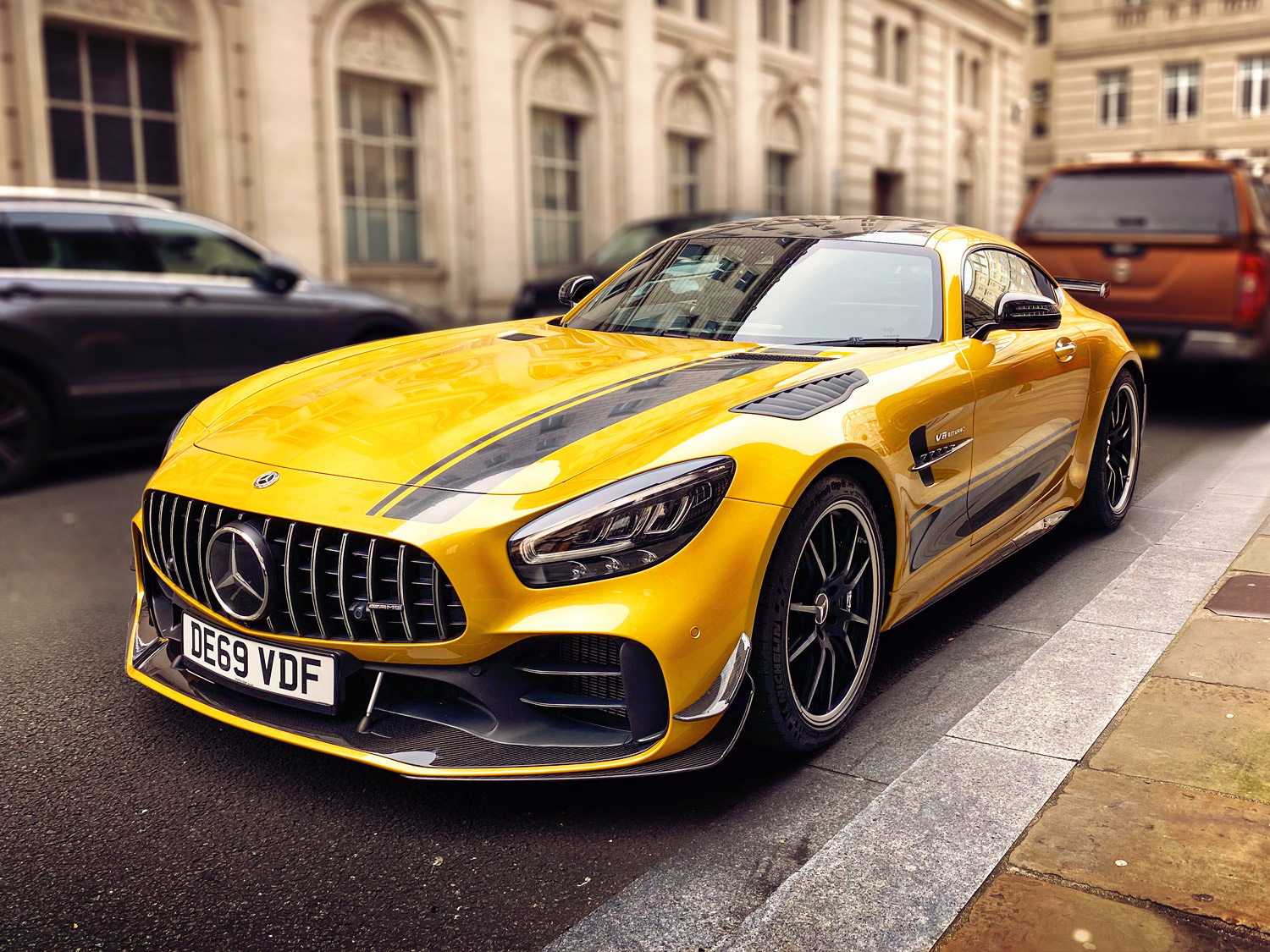 If you’ve got a car you want to photograph or an interesting photographic project – get in touch with Experience Photography now.